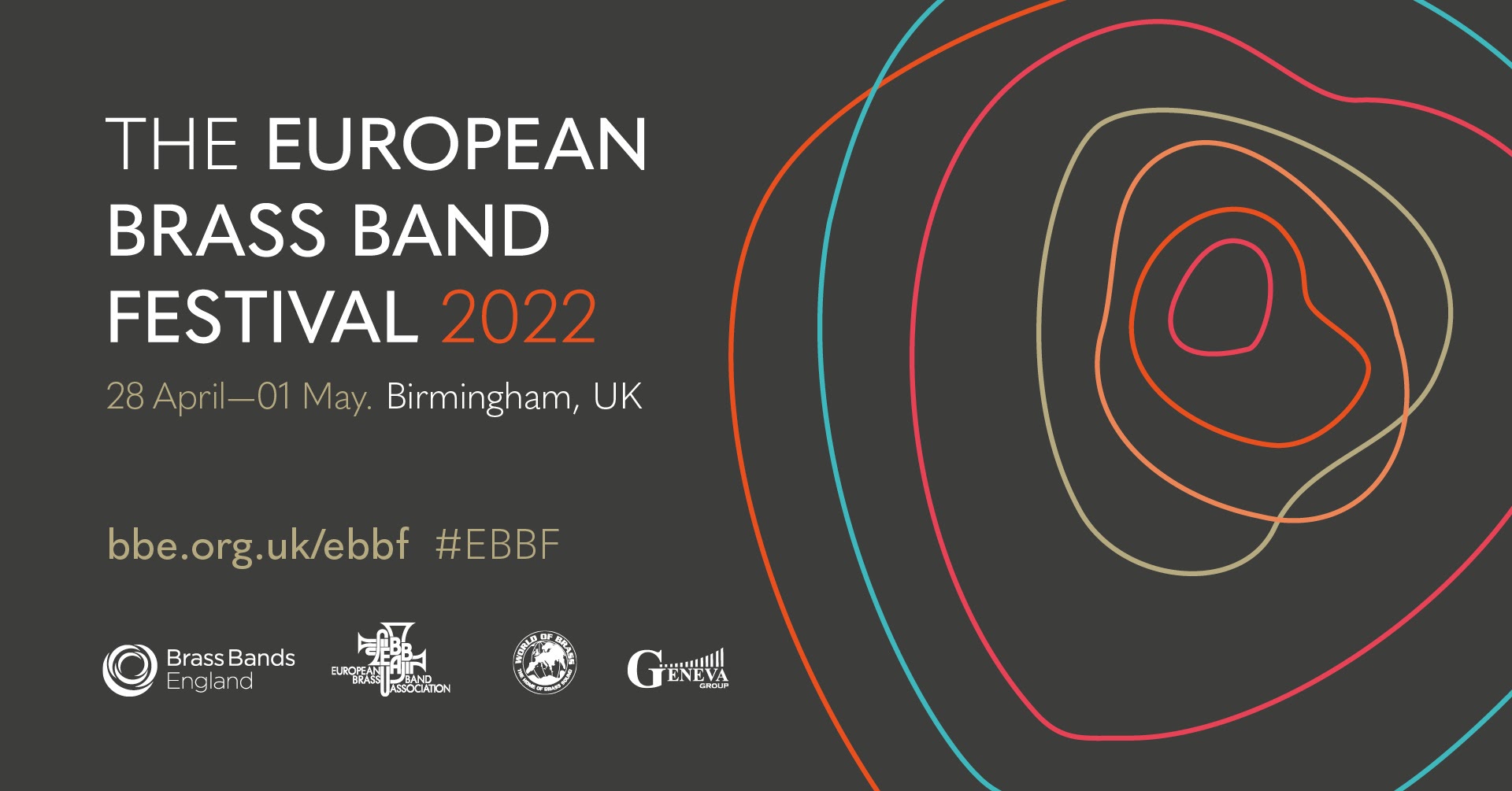 The ambitious, large-scale EBBF will see four days of brass banding events taking place in the city of Birmingham between 28 April and 1 May 2022. Organised by Brass Bands England (BBE), the event will see bands from across Europe gather in a celebration of music-making which, for many, will mark a return to contesting.

The Festival will encompass a number of events, including the European Brass Band Championships in association with World of Brass, comprising Championship and Challenge sections, which will take place at Birmingham’s Symphony Hall on the Saturday and Sunday of the Festival.

Ulf Rosenberg, President of the European Brass Band Association, commented: „The European brass band family will be back in England for the first time since 2007 and we are looking forward immensely to what promises to be a fantastic event. Brass Bands England has assembled an outstanding programme of events and performers which, combined with the excellent facilities at Birmingham’s Town Hall and recently remodelled Symphony Hall, will guarantee a very exciting weekend of high-quality music-making. The return of the world’s leading banding event, in the cradle of brass band culture and three years after our last event in Montreux, is an occasion not to be missed by any lovers of our music!”

Along with the Championship and Challenge sections, proceedings will include the Development and Premier sections of the European Youth Brass Band Contest. Compositions in the European Composers Competition will be performed by the world-famous Grimethorpe Colliery Band.

As an addition to the 2022 Festival, a concert performance from the National Youth Brass Band of Great Britain with The Band of HM Royal Marines will take place on 28 April in a special ‘Prelude’ concert ahead of the competition events.

The event’s closing Gala Concert will feature some further big names in the world of brass, with music being provided by the Louis Dowdeswell Big Band and defending European Champion, Cory Band.

Speaking about the prospect of performing in this high-profile event in collaboration with the UK’s leading big band, Cory Musical Director, Phil Harper, said: „The opportunity to work with Louis and the band is one which all of us at Cory are really looking forward to. The programme will be a true cross-over of both genres, which is always exciting, and we hope it will be an epic concert to be remembered for a very long time!“

Louis Dowdeswell added: „Wow, this is going to be a show to remember! Both for the audience but also for me and my band. What a thrill to be playing alongside the almighty Cory Band! We have some brand new, incredible material to present and we can’t wait to premiere it at this fantastic event!“

To round-off the long weekend, attendees will be welcomed to join competing bands at a closing party, with further musical entertainment from the talented Louis Dowdeswell in the fantastic facilities of the redesigned Symphony Hall Foyer.

In order to help audience members plan and prepare for the event, BBE is offering the chance to obtain tickets for the Championship weekend a whole three months in advance of the general sale. This will include entry to all events taking place at Symphony Hall Birmingham on Saturday 30 April and Sunday 1 May.

Entry to the ticket lottery costs £1, plus the cost of the tickets if you are successful, and all proceeds from the lottery will be used to support BBE’s ground-breaking Brass Foundations programme. The lottery will open at midday on Monday 23 August on the BBE website and will remain open until 11.59pm on Saturday 11 September. Successful applicants will qualify to purchase either a pair of tickets or a single ticket for the Symphony Hall events from the 400 available in this initial release. Full details are available on the BBE website and entries are welcomed from all nations.

When does general booking open?

General ticket sales for all European Brass Band Festival events will open on Friday 10 December 2021. You can register for the BBE mailing list to be alerted when sales begin.

For those joining internationally, information about the city, travelling to the venues and hotels can be found at bbe.org.uk/EBBF.

About the European Brass Band Festival:

EBBC was founded in 1978 at the Royal Albert Hall in London. It has since gone on to become the most important international brass band competition in the world, with bands from 18 countries competing for the title of European Brass Band Champion in the Championship, Challenge and Youth sections.

In 2020, Brass Bands England was asked to host the 2022 event, which will be the first to take place following a two-year hiatus due to the COVID-19 pandemic, relaunching this international event in the cradle of the brass band community.